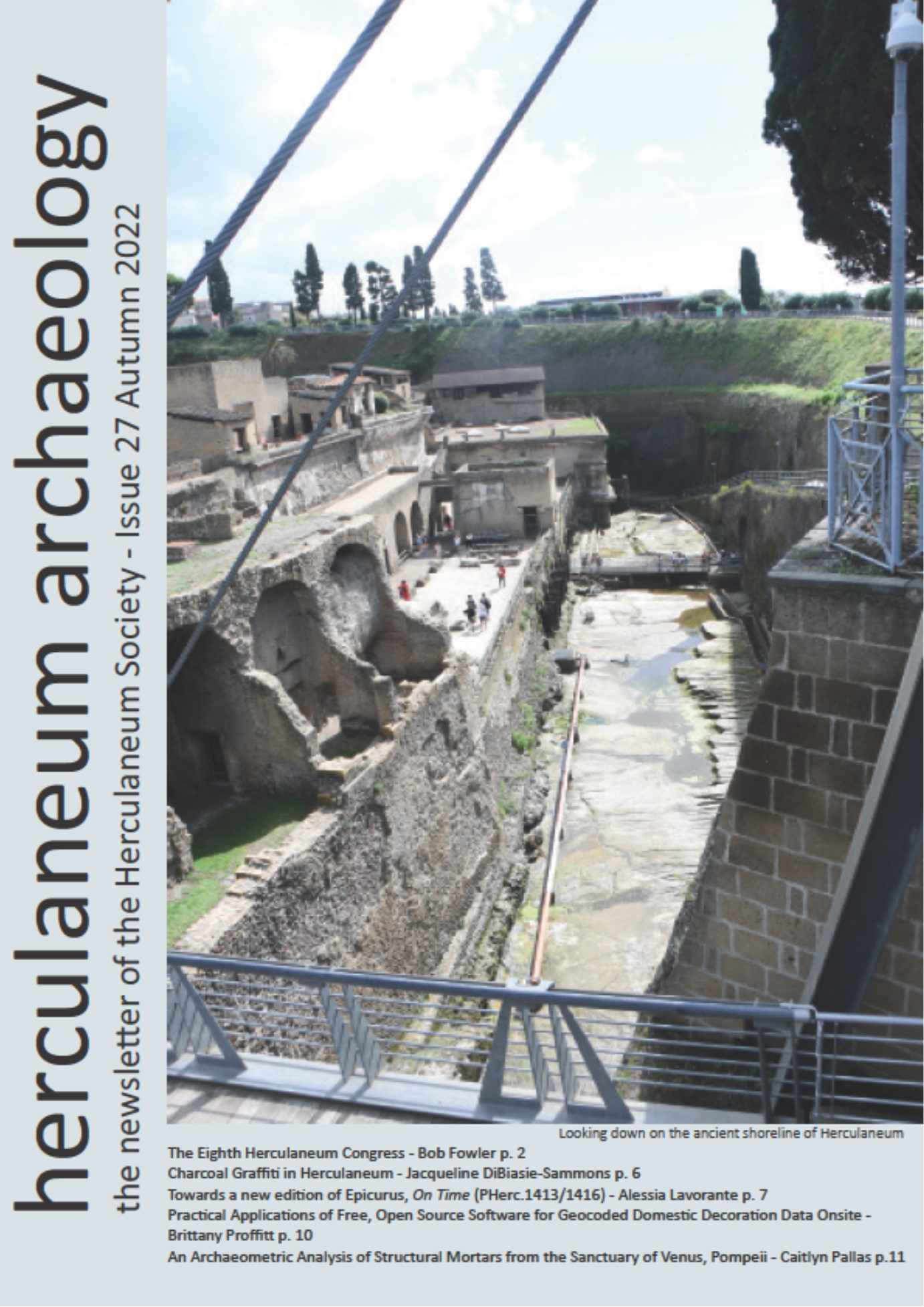 Latest issue of the Newsletter:

Issue 27 (Autumn 2022) has a report of the Eighth Herculaneum Congress; an article on the charcoal graffiti of Herculaneum by Jacqueline DiBiasie-Sammons; an account of her work on PHerc 1413.1416 (Epicurus, On Time) by Alessia Lavorante; Brittany Proffitt on the use of opensource software for geocoded onsite data; and Caitlyn Pallas on archaeometric analysis of the structural mortars in the sanctuary of Venus at Pompeii.

Issue 26 (Autumn 2021) has a report by Bob Fowler of Direttore Sirano's recently published overview of work at Herculaneum 2001-2021; an article on Flavian Literature by Joy Littlewood; Richard Janko on editing Philodemus; Roger Macfarlane on the panel of the American Friends of Herculaneum at the 2021 meeting of the Society for Classical Studies.

Issue 25 (Autumn 2020) includes news from Herculaneum (the astounding identification of vitrified brain matter and its scientific import; honours for Francesco Sirano and Gianluca Del Mastro); Nigel Wilson on digital restoration of ancient texts; Silvia Soncin on the skeletons of Herculaneum; Holger Essler on the full-text database of the Herculaneum papyri; Kilian Fleischer on the 'King's Book' written for the future George IV on the Herculaneum papyri, discovered at Windsor and now online; and Trevor Mathews on how the pandemic has affected papyrological research.

Issue 24 (Autumn 2019) includes the latest news from Herculaneum; information about of the upcoming Eighth Herculaneum Congress [in the event, postponed to 2022 because of the pandemic]; reports from Society bursar holders Marzia D'Angelo and Claudio Vergara on their research on the Herculaneum papyri, and from the American Friends bursar holder Daniel Healey on his work on Roman architecture; latest news from Brent Seales's team at the University of Kentucky; an account of the Friends visit to the Getty Museum exhibition on Herculaneum and associated conference; a report on a lecture by the Director of the Office of Papyri, Dott. Fabrizio Diozzi, at Brigham Young University; a review of the Getty exhibition catalogue edited by Kenneth Lapatin, and a preview of the forthcoming volume on the House of the Bicentenary by Sarah Court and Leslie Rainer; and a review of 'Last Supper at Pompeii' exhibition at the Ashmolean

Issue 23 (Autumn 2018) includes an account of the Seventh Herculaneum Congress; a news update from Brent Seales; a review of Lavender... for You by Jack Godwin (Friends member); an article on ancient dining at Herculaneum by American Friends scholarship holder Janet Dunkelbarger; a report on the season's work by the Ancient Graffiti Project at Herculaneum, supported by the Friends; and miscellaneous news items.

Issue 20 (Autumn 2016) includes a report of the Sixth Herculaneum Congress; news from our Bursary recipients; an article on the Herculaneum boat; an assortment of other news; results of the 2015 Schools Competition.

Issue 19 (Summer 2015) features a review of the British Museum exhibition Defining Beauty; a field report from the Apolline Project; an account of the Ancient Graffiti Project; news of the American Friends panel at the 2014 Southeastern College Art Conference; a report on the first Summer School sponsored by the Friends; and honours to two of our Trustees.

Issue 18 (Summer 2014) includes a summary account of the Fifth Herculaneum Congress; a resume of the talks given by Society bursars during the congress; a news item on the statuettes donated to the Soprintendenza by the Chiurazzi Foundry (est. 1870) made with moulds taken from bronzes in the Villa of the Papyri; and a report on a project for the rejuvenation of the immediate neighbourhood of Ercolano bordering on the excavations.

Issue 17 (Winter 2013) includes a talk by Robert Fowler on 'Herculaneum in the 21st century - why care?' given at the British Academy colloquium (5 August) organised by the American Friends; an article on recent research on Vesuvian villas by Roger Macfarlane; a report on the Getty's 40th anniversary by Kenneth Lapatin, and by David Saunders on the Bronze Tiberius from Herculaneum newly returned to the Getty; and news of progress from Friends bursar Gertjan Verhasselt on his work on Dicaearchus in the Herculaneum papyri.

Issue 16 (Spring 2013) covers the British Museum exhibition including an interviews with curator Paul Roberts and assistant curator Vanessa Baldwin, a review of the exhibition catalogue, and the winning entries from the 2013 Schools Competition, which invited entrants to compose tales around selected objects from the exhibition. Also in the issue were a report of the Last Days of Pompeii exhibition in Cleveland, OH, and a report from Sarah Hendriks on her work funded by a Friends bursary.

Issue 14 (Winter 2011) has an account of the Friends' visit to the Museum of London in June; a report from our bursar Niki Savvides on the work she's been doing courtesy of the Friends; a fine clutch of book reviews; Members' Corner, with a feature on Leofranc Holford-Strevens; and the results of the Schools Competition.

Issue 13 (Winter 2010) contains a report from Dr Maria Paola Guidobaldi, Director of Excavations, Herculaneum, on recent work on the Villa of the Papyri; an article on the problem of 'overlaid' and 'underlaid' fragments in editing Herculaneum papyri; and the usual roundup of news.

Issue 12 (Summer 2010) contains news, a full report of the Third Herculaneum Conference by Robert Fowler, an article by Christopher Smith, Director of the British School at Rome, and a report on the travelling exhibition "Pompeii and the Roman Villa" by Carol Mattusch.

Issue 11 (Summer 2009) contains news and a full report of the Paris meeting by Richard Janko.

Issue 10 (Winter 2008) offers a translation of "An Eighteenth-Century Traveler's Account" by Nigel Wilson, an interim report on "Computer Modelling in Herculaneum" by Peter Spital, and the winning entry in the Schools Competition.

Issue 9 (Summer 2008) includes a report of the Second Naples Congress, an article on "Roman Libraries and the Villa of the Papyri" by Matthew Nicholls, and a report by Society bursar Ciro Montella on "Aspects and Problems of Insula II at Herculaneum".

Issue 8 (Winter 2007) includes "Activities of the Centro Internazionale per lo Studio dei Papiri Erconalesi" by Francesca Longo Auricchio, an account of the international Villa of the Papyri Conference by Mantha Zarmakoupi, and an article on "Tracing the Water Supply at Herculaneum" by Society bursar Duncan Keenan-Jones.

Issue 7 (Summer 2007) includes a report on the Getty Villa by Roger Macfarlane, "Virtual Villa: digitally reconstructing the Villa of the Papyri" by Mantha Zarmakoupi, "What's in a name?", by Holger Essler, and "Lucretius and Roman Epicureanism", by Beate Beer.

Issue 3 (Summer 2005) includes an updated account of the Herculaneum Archive (Dirk Obbink), “Mapping the Villa of the Papyri” (Mantha Zarmakoupi), “The Virtues of Virtual Unrolling” (Brent Seales), “Herculaneum in the History of Art Criticism” (James I. Porter), and a review of Carol C. Mattusch, The Villa dei Papiri at Herculaneum: Life and Afterlife of a Sculpture Collection (Matthew Bladen).

Issue 2 (Winter 2005) includes an introduction to the Society’s Archive, “Deconstructing Herculaneum” (James Andrews on the excavation and reconstruction of the site), “Brought to Light” (new images from Herculaneum and Monte Soma), “News from the Herculaneum Papyri” (Richard Janko), “Il Porcino - Our Mascot?” (Dirk Obbink), and a review of L. Richardson, Jr., A Catalog of Identifiable Figure Painters of Ancient Pompeii, Herculaneum, and Stabiae (Matthew Bladen).

Issue 1 (Summer 2004) includes an introduction to the Society and its aims (Robert Fowler and Dirk Obbink), “To Dig or not to Dig?” (Andrew Wallace-Hadrill and Robert Fowler), “Out of the Ashes” (Roger Macfarlane, on digitally imaging the Herculaneum Papyri), and a review of Shelley Hales, The Roman House and Social Identity (Anna Collar).